Colours between feminine and masculine impression meet each other. Underlying forms from the architecture, which lead a precise dialogue through their laconic simplicity. Architecture as an inspiration and synonym for the shawl. Both are characterised by duality in the room layout; both interior and exterior can be created.

The generous surface compositions created as the first are rhythmized by structures that also take up the themes of man and woman/ masculine and feminine. In addition, the biological sexes of ‘man’ and ‘woman’ are introduced into the design by means of illustrative forms, without, however, strikingly pointing out their origin.

These aforementioned details were generated manually, digitally processed and the realization of the shawls took place in digital printing. In a transformed application, flex foil encloses the edges of the cloths. A material contrast is created between light cotton and a PVC-free film made of polyurethane, which enables a clear and unambiguous edge situation of the shawls. This bordering of the edges is new in its optics, unexpectedly fascinating in its appearan- ce and serves as a distinguishing feature of the collection.

The collection is intended to enable consumers to adopt an open attitude towards gender in design in an age marked by it. Detached from this, the shawl as an accessory of feminine and masculine design is always superior and thus, regardless of gender, a sign of individuality and personality. A shawl collection in the 21st century! 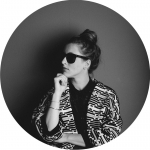